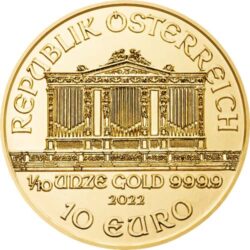 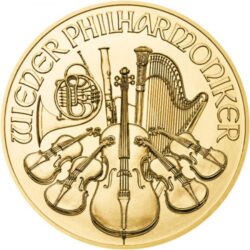 The gold for sale in the Austrian Philharmonic Series from the Austrian Mint is much like that of any other major gold bullion program. The mint offers a 1 oz gold coin alongside a variety of fractional-ounce gold coins that include the extremely popular weight options of 1/2 oz, 1/4 oz, and 1/10 oz. Additionally, this series boasts a unique 1/25 oz gold coin.

Bears a face value of 10 (Euro) backed by the federal government of Austria.

Obverse features the Great Pipe Organ at the Musikverein.

All coins in the Austrian Philharmonic Series have the same design elements as created in 1989 by Thomas Pesendorfer, the Chief Engraver of the Austrian Mint.

Obverse design elements on the 2022 1/10 oz Austrian Gold Philharmonic Coins include a depiction of the Great Pipe Organ. The current pipe organ in the Musikverein was installed in 1907 and modernized in 2011. The organ is a central feature of the Musikverein, one of the worlds foremost concert halls.

Reverse visuals on the 2022 Austrian Gold Philharmonic include a cluster of musical instruments. The musical instruments shown here include a cello, four violins, a harp, a bassoon, and a Vienna horn. The members of the Vienna Philharmonic Orchestra are professional musicians selected from the Vienna State Opera. Each individual must undergo a lengthy selection process and have more than three years of experience in opera and ballet performances.