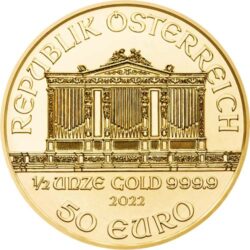 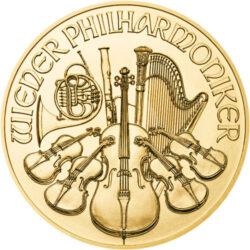 *4 OZ minimum gold purchase unless minimum is met with some other metal (silver, platinum, palladium). A $25 charge will be applied for order less than 7 OZ.*

The Austrian Philharmonic coin series is one of the most beautiful in the world. Its images were created in 1989 by Austrian Mint Chief Engraver Thomas Pesendorfer and celebrate a national treasure of the Republic of Austria: the Vienna Philharmonic Orchestra. The designs remain the same year after year and have proven popular with investors around the world.

Tubes of 10 coins.
29th year of issue for the 1/2 oz Austrian Gold Philharmonic.
Contains 1/2 Troy oz of .9999 pure gold in BU condition.
The face value of 50 (Euro) is fully backed by the Austrian government.
A view of the Great Pipe Organ in the Musikverein is on the obverse.
A collection of musical instruments is found on the reverse.


Orchestra, live music performances have a rich tradition in Austria. Prior to the 1830s, it was common to experience public orchestral performances in Vienna by orchestras cobbled together with a mixture of professional and amateur musicians. A group known as the Kunstlerverien was formed in 1833 by Franz Lachner and performed four concerts, including a Beethoven symphony. This group is widely considered the forerunner to the Vienna Philharmonic Orchestra, which was formed nine years later in 1842.

In the obverse design element, the 2022 Austrian Gold Philharmonic Coin offers a view of the Great Pipe Organ inside of the Musikverein. The home venue for the orchestra in the city of Vienna, the Musikverein is also known as the Golden Concert Hall and is located in the Innere Stadt neighborhood of the city.

For the reverse design of 2022 1/2 oz Austrian Gold Philharmonic Coin, the Austrian Mint depicts a cluster of musical instruments reflective of those used by members of the orchestra. This design element includes a Vienna horn, a bassoon, a harp, and four violins all centered on a large cello.

Members of the Vienna Philharmonic Orchestra are all professional musicians chosen from the ranks of the Vienna State Opera. The selection process is lengthy and involves demonstrating skill and possessing a minimum of three years of performance experience in opera and ballet.