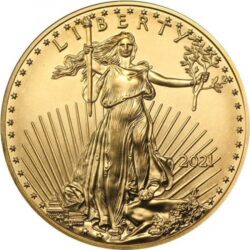 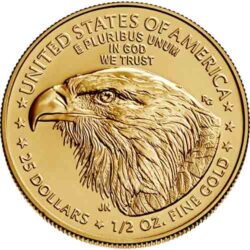 The American Gold Eagle Series from the United States Mint features a 1 oz gold coin paired with three fractional-ounce coins for investors to purchase. Among those fractional-ounce coins, the 1/2 oz gold coin is the largest option and one of the lower minted in the series. The 2021 release of the American Gold Eagles marks the 35th anniversary of the series and will eventually offer a new reverse design element by the middle of the year.

Bears a face value of $25 (USD) backed by the federal government.

Lady Liberty features on the obverse of the coin.

American bald eagles on the reverse of the coin.

Each of the 2021 1/2 oz American Gold Eagle Coins available in this product listing come in Brilliant Uncirculated condition. These coins are available to purchase in tubes with 40 coins. The 2021 date mark in the American Gold Eagle Series represents the 35th anniversary for the collection.

Lady Liberty features on the obverse of the 2021 American Gold Eagle Coin as designed by Augustus Saint-Gaudens. This design was first created in 1907 and featured on the obverse of the $20 Double Gold Eagle Coin. The original design featured a ring of 46 stars around Liberty, reflective of the number of US states in 1907. In 1912, the number of stars grew to 48 to represent the addition of New Mexico and Arizona into the Union. For the 1986 debut of the American Gold Eagle, two additional stars were added to represent the 1959 admission of Alaska and Hawaii into the Union, bringing the total number of stars in this design to 50.

A family of American bald eagles is depicted in the reverse design of the 2021 1/2 oz American Gold Eagle. This design element depicts a male eagle in flight over the nest with a branch in its talons as a female eagle shelters in the nest with a young hatchling.