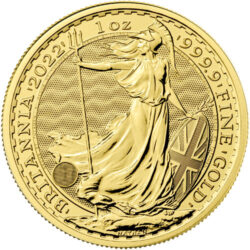 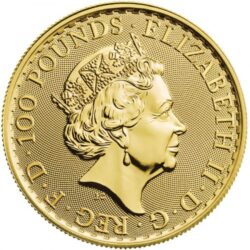 One of the worlds leading gold bullion coins is the British Britannia. Introduced in 1987, only the South African Gold Krugerrand, Canadian Gold Maple Leaf, Chinese Gold Panda, and American Gold Eagle have been available longer as annual gold bullion collections.

Bears a face value of 100 Pound sterling (GBP) backed by the government of Britain.

Queen Elizabeth II found on the obverse of the coins.

Britannia is featured on the reverse of the coins.

The new 2022 Britannia Gold Coins have security features courtesy of the Royal Mint. There are four features in total that include a latent security feature, tincture lines within the stripes of the Union Jack flag on the shield of Britannia, micro-text on the design rim, and a new surface animation. The micro-text is in Latin and reads Decus Et Tutamen, which translates to An Ornament and a Safeguard. As the holder changes the angle of viewing, the latent feature switches between a trident image and a padlock, while the surface animation reflects the rolling waves of the sea.

Queen Elizabeth II is found on the obverse side of 2022 1 oz British Gold Britannia Coins. This is the fifth-generation effigy of Queen Elizabeth II to feature on British coins and was designed in July 2015 by Jody Clark. Mr. Clark, just 33 years old at the time, is the youngest artist ever to create a monarchs portrait for British coins. The Queen is shown at the age of 89 in this design and wears the George IV State Diadem Crown, a piece within the official Crown Jewels of England.

Britannia is depicted on the reverse face of 2022 British Gold Britannia Coins. This image of Britannia is the most recent to feature on British currency and was developed by Philip Nathan in 1987 for the release of these coins. Britannia is shown standing on a small patch of coastline with a shield in her left hand bearing the Union Jack and a trident in her right hand to give her control of the seas.