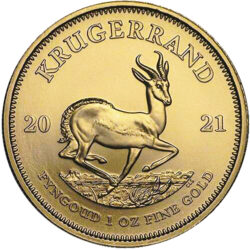 
The ship delay on this product is: 1 Week

The Gold Krugerrand is perhaps the one coin that needs no introduction to investors. Available since 1967, this beautiful gold coin is often referred to solely as the Krugerrand or Gold Krugerrand and investors know exactly which nation it comes from.

An effigy of Paul Kruger is featured on the obverse.

The Springbok antelope is depicted on the reverse.

Each 2020 1 oz South African Gold Krugerrand Coin in this product listing comes to you with an individual protective plastic flip or a mint tube of 10 coins. Each of the individual coins is in Brilliant Uncirculated condition.

The 19th-century effigy of Paul Kruger is featured on the obverse of all 2020 South African Gold Krugerrand Coins. This left-profile portrait of the first President of the South African Republic was originally created in 1892 for use on South African Pound denominations and adapted to the Krugerrand by Otto Schultz.

The national emblem of modern South Africa, the Springbok antelope, is depicted on the reverse face of 2020 1 oz South African Gold Krugerrands. This right-profile image shows the elegant creature in motion in its native habitat across southern Africa. This design was created in 1967 for the series by Coert Steynberg.

South African Gold Krugerrands are produced using a gold-copper alloy to create a more durable coin than pure gold allows. Krugerrands feature 22-karat gold content, or 91.67% gold, with the remaining 8.33% of the content consisting of copper.

All Gold Krugerrands are produced by the South African Mint and Rand Refinery. The mint is a government-owned corporation that produces circulation Rand denominations for the country and the Krugerrands.