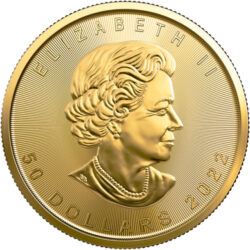 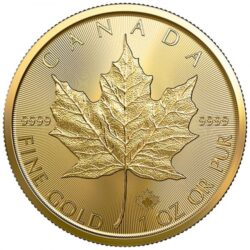 
The ship delay on this product is: 4 Weeks

Bears a face value of $50 (CAD) backed by the federal government of Canada.

On the obverse side is a depiction of Queen Elizabeth II. The reverse field features the sugar maple leaf.

On the obverse side of 2022 1 oz Canadian Gold Maple Leaf Coins, you will find the image of Queen Elizabeth II. Since 2005, the Canadian Gold Maple Leaf has featured the fourth-generation bust of Elizabeth II that was created in 2003 by Susanna Blunt. It was just the second portrait of a British monarch for Canadian coins ever created by a Canadian artist. The design shows the Queen in right-profile relief without a crown.