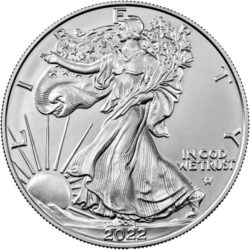 
The ship delay on this product is: 4 weeks

*100 Oz minimum silver order unless minimum met with some other product (gold, platinum, palladium). $25 charge for orders less than 200 Oz. Call for details.*

Tubes of 20 coins, or a mint-sealed Box of 500 coins. 35th anniversary for the American Silver Eagle. All-new reverse design (T2).
Contains 1 Troy oz of .999 pure silver in BU condition.
Face value of $1 (USD) backed by the federal government.
The obverse features Walking Liberty.
On the reverse is the new image of an American bald eagle swooping into view with an oak branch in its talons.
New reverse design by Emily Damstra.
Enhanced obverse design includes Adolph A. Weinman’s original “AW” signature mark.
Anti-counterfeiting reeded edge!
Each of the 2022 1 oz American Silver Eagle Type 2 Coins available in this product listing come in Brilliant Uncirculated condition. Individual coins in this series come in protective plastic flip, with multiples packaged inside of plastic tubes of 20 coins or Monster Boxes of 500 coins. The Monster Box holds a total of 25 individual plastic tubes.

The redesign of the American Silver Eagle coin took several months across 2020 for the US Mint to narrow down. The original list of possible designs considered by coinage groups and the US Mint included some 35 different designs. In the end, a new depiction of the American bald eagle in its natural element was chosen to replace John Mercantis heraldic eagle. Emily Damstra is the designer of the new reverse image for the collection. The enhanced image of Walking Liberty on the obverse includes the reintroduction of Adolph A. Weinman’s artistic signature mark on the field, bringing the modern design closer to the original 1916 image.

The obverse side of the 2022 American Silver Eagle Type 2 Coin features the Walking Liberty design from Adolph A. Weinman. This design was first developed in 1916 and originally used on the US Mints half dollar. The image shows Liberty in left-profile relief walking toward the sun on the horizon. Beneath the “TR” in the inscription of “In God We Trust” is where you will find Weinman’s signature mark consisting of his “AW” initials.

On the reverse field of 2022 1 oz Silver Eagle Type 2 Coins is a new depiction of the American bald eagle. Now featured in a more life-like design, the American bald eagle swoops down into view with its wings flexed behind its back and a large oak branch in its talons. Emily Damstra chose to include an oak branch with the eagle as the oak is the national tree of the United States and is a well-known symbol of strength