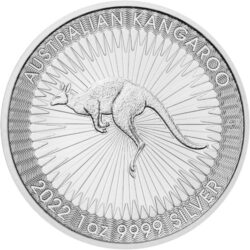 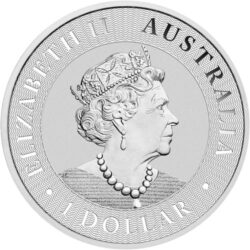 
The ship delay on this product is: 3 Weeks

*100 OZ minimum silver purchase unless the minimum is met with some other product (gold, platinum, palladium). $25 charge for orders less than 200 OZ. Call for details.*

The Australian Kangaroo Series is one that has been available from Perth Mint for several years. Originally only offered as a proof collection, in 2016 this series not only gained a Brilliant Uncirculated specimen, but also became the first in the history of Perth Mint to offer .9999 pure silver content in an annual-release program.

A hopping kangaroo is found in the reverse design of 2022 1 oz Silver Kangaroo Coins. This image captures a red kangaroo hopping along in left-profile relief with rays of sunshine in the background. This beautiful design is based on the Stuart Devlin design from the famous Australian Copper Penny.

Perth Mint was founded in 1899 as the third branch facility of the Royal Mint of England. The mint filled many roles following its opening and has been a state-owned mint of Western Australia since 1970.