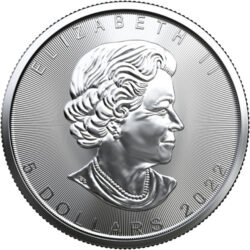 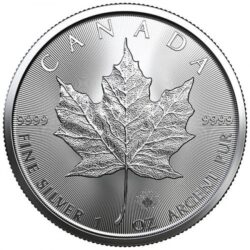 
The ship delay on this product is: 4 Weeks

100 Ounce minimum silver order unless minimum is met with some other product (Gold, Platinum, Palladium).  Call for details.  $25 applies to orders under 200 Ounces.

The Canadian Silver Maple Leaf coin was the first .9999 pure silver bullion coin when it was introduced in 1988. To this day, few other annual-issue silver bullion coins have this level of purity and stands as one of the most popular silver coins for sale.

Queen Elizabeth II on the obverse.

Sugar maple leaf on the reverse.

These security features include radial lines that refract light in different directions on both the obverse and reverse fields of the coin. There is also a micro-engraved laser privy mark in the form of a maple leaf on the reverse. Inside of this privy mark, you will see the last two digits of the date mark as 20 in the case of these Silver Maple Leaf coins.

The obverse side of 2022 Canadian Silver Maple Leaf Coins features the effigy of Queen Elizabeth II. This is the fourth-generation portrait of Her Majesty and was created in 2003 by Susanna Blunt. This design is the first of the Queen to not feature a crown on the monarchs head and is also the first design to do so since early in the reign of her father, King George VI.